Fender ’68 Deluxe reissue modded by Paul Rivera
In the 70's-80's Paul Rivera became known for extensively modding amps with sophisticated features like turning single channel amps into two channel amps using dual concentric pots, adding gain stages, multi tone switches, 6 position voicing selections and so much more.  In an era of simple designs where session guitarists had to use different amps for different tones, Paul Rivera pioneered maximum flexibility of tone using ONE amp.  This of course saved time and money in making records and soon not only would would top session guitarists bring their amps to him, producers would ask the guitarists to use them. Fender 68' Deluxe Reissue modified by Paul Rivera.  Now have a recreation of the original modded amps Paul Rivera became famous for.

These new Fender 68′ Deluxe reissues modified by Paul Rivera are recreations of these legendary tones. These features were also brought to his Fender designs and now Rivera amp designs.

These mods are what Paul Rivera called “Stage 2” which include:

-Channel 1 now independent from “lead” channel 2, making it a true 2 channel amp. (use AB switch to switch between Channels)
-Increased headroom, less flubby on both Channels.
-Channel 2 can become a Lead/Overdrive Channel
-Treble “Pull Bright” to spanken up and Middle “Pull Notch” for Blackface tones are added to both channels. This allow for each channel to have 4 different clean tones combinations.

-Channel 2 gets a 6 position FAT switch for thickening mids and increases harmonics,
Increased Gain and Added Master &“Pull for Boost” for added overdrive/sustain. Master allows for overdrive at lower volumes.

Presence (affects both channels) added for shimmer control of the power amp.

REAR PANEL:
-Speed and Instenisty are relocated in rear to allow space for added controls in the front.
-Hum Adjust control is added-for balancing the preamp tube filaments for minimum hum to compensate for different brands. This is important since vintage amps have AC filaments vs most modern amps with DC filaments. 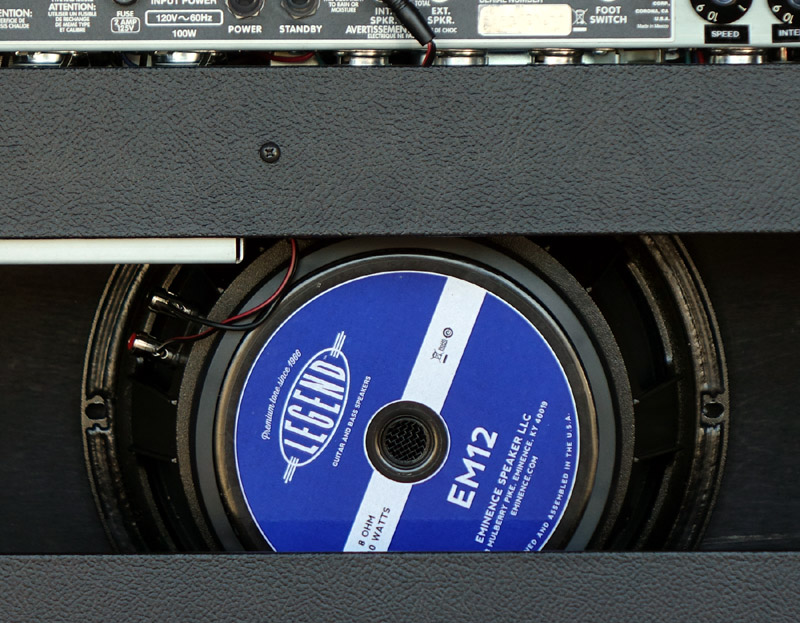 Speaker upgrade:
The 12inch speaker is upgraded from the stock Celestion V type to a Eminence Legend EM12.  We’ve also reinforced the baffle for the added weight.  The Eminence was created to clone the original Electrovoice EVM12L
originally installed in Paul Rivera’s modded Fenders. This speaker allows you to crank the amp up to get power amp overdrive with smooth clean sustain without bottoming out the speaker.  Also adds headroom and volume.  The EM12 or the original EVM12L’s were one of the few speakers that could handle a tube amp played wide open while staying tight and warm.

These soon to be highly valued collector amps modified by Paul Rivera himself are being made for a limited time.  Exclusively sold through Sweetwater Music worldwide.